Theoretically, a short golf game is easier for you.

When it comes to the case, you should use either chip shots or pitch ones.

And, good to know is, a chip possibly travel longer than a pitch.

Thus, here we will focus on how to practice chipping properly to improve your scores and your skills. 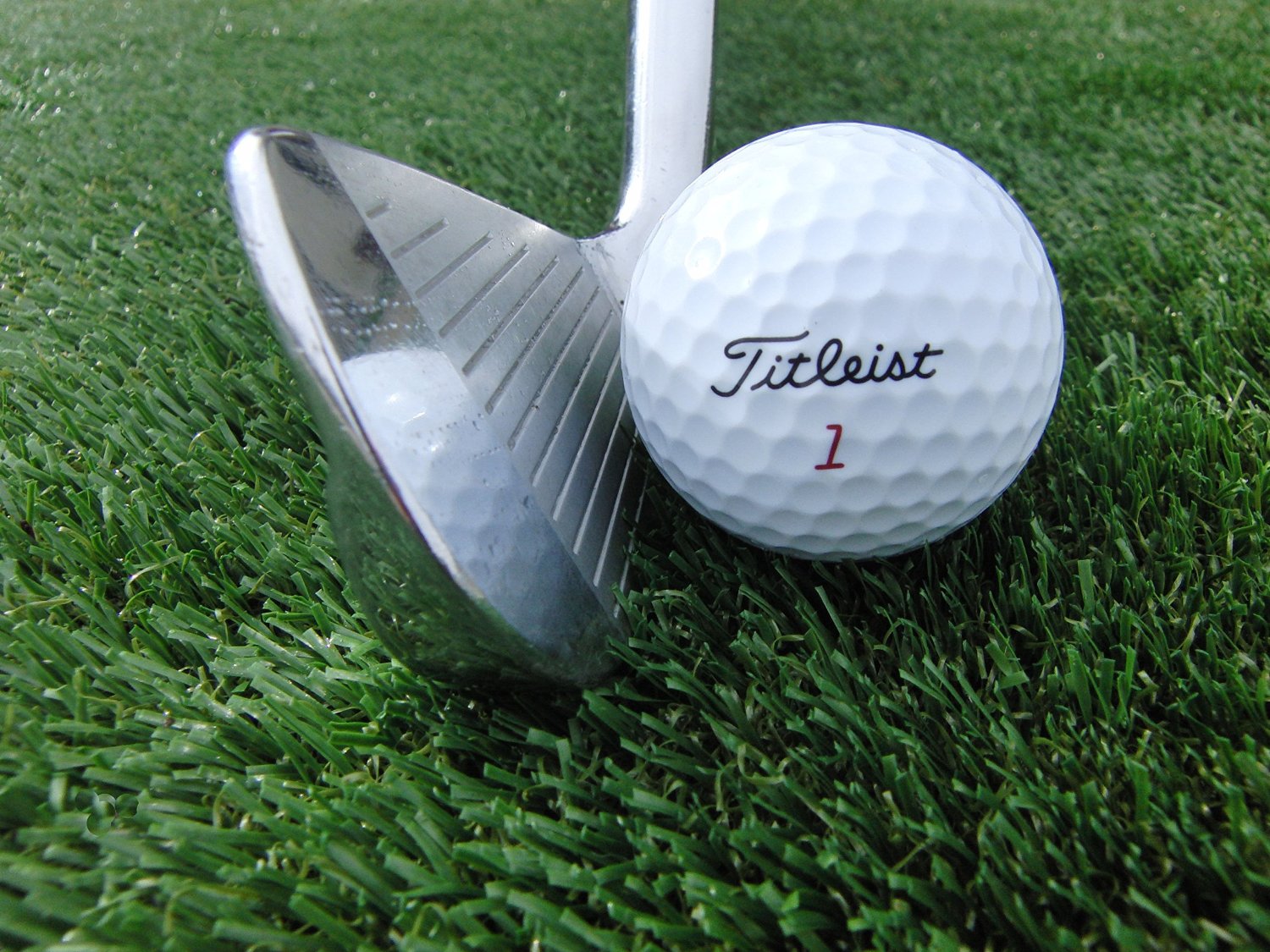 What Are Chip Shots In Golf?

Chipping is a common technique for any golfer.

Nonetheless, not many of them can master it without practicing.

Some might even do not know the chip shots well.

So before we start with chipping practice, let’s discuss some definitions first.

Based on almost every golf document for dummies, a chip short is the short game in which a ball pops up near the green and possibly rolls further than its flies, especially on hard grounds and slopes.

In other words, the ball spends more time on the surface than on the air.

While chip shots are well defined, they are usually mistaken for pitch shots which are also short-game shots.

Basically, a pitch shot is in the air longer than on the surface and higher away from the green.

Secondly, they are played in different clubs and with different techniques.

What Makes To Get a Good Chip?

Generally, good chip points should come with a solid impact, a suitable shoulder level, and a right swing.

Lowering your point to create a solid impact

It is a tip to begin the shot with a downswing low point at or in front of the ball.

Then, you can hit it first before touching the turf.

Simply put, drop your body lower on the right side than the left side instead of tilting away from the golf ball or moving your hips towards it.

Posture right and you can see the ball skull or chunk rather than go up.

If you are right-handed, keep the left shoulder over the left foot with the ball in the center.

This helps shift your weight and trunk forward – not the hips, we confirm again.

Then, hold the club straight with your right hand against the high of the shoulder and measure the distance you expect to hit the ball.

Together with the left arm, your body is slightly tilted to the left and you are well-postured for a swing.

Slowly fold the right arm and hinge the left wrist for a backswing.

Your right shoulder should maintain still.

Move the clubhead upward to hit down on impact.

Next, unfold the right arm.

At the same time, remember to have your right elbow tucked into your side and the right wrist bent a little.

That way, you can perform scoring a powerful strike.

In fact, there are several chipping techniques shared by golf experts.

It makes you a bit confused and not know where to start.

However, most golfers come down to two common chipping styles – one adopted from Seve Ballesteros and the other from Phil Mickelson.

Of all, Seve’s chipping style is more common.

You can hold the olf club softly, having the wedge’s bounce contacted before the ball and skimmed along the ground.

This is ideal in case you want to control distance by moving your arms, body, and club together.

Phil’s chip shots are also effective, in which you hinge the club during the backswings and toward the target.

To be exact, Phil does not skim the club along the turf but drives it down into the ball.

The difficulty is to keep your body spot-on every time.

How to Practice Chipping Game Around The Green?

Here we introduce the key to practice skill around the green according to Seve’s style.

Step 1: Stick to one club

Remember to stick and practice every shot with a club instead of picking up a club randomly.

For chip shots, a club on the PW sand wedge of 5 to 9-ion is suggested.

Its short shaft is helpful to control the club and the loft makes it easier for the ball to be got into the air.

The required setup will significantly improve the power of the chip shots.

What you need to do is to look at the terrain from the ball in front of you.

Choose a short distance for the landing spot.

Then, it on the ball first and the ground second.

To do so, you had better strike the ball before the swing’s bottom.

Plus, lean your body and the club slightly forward, meaning the back shoulder is higher than the front.

Meanwhile, you should rip the club with your forward thigh and the shaft gets leaned toward the target.

Try to keep the swing there.

As a result, the swing is steeper for a solid shot.

The ball is supposed to land close to your spot before it rolls up near the hole.

Step 3: Also keep the head down 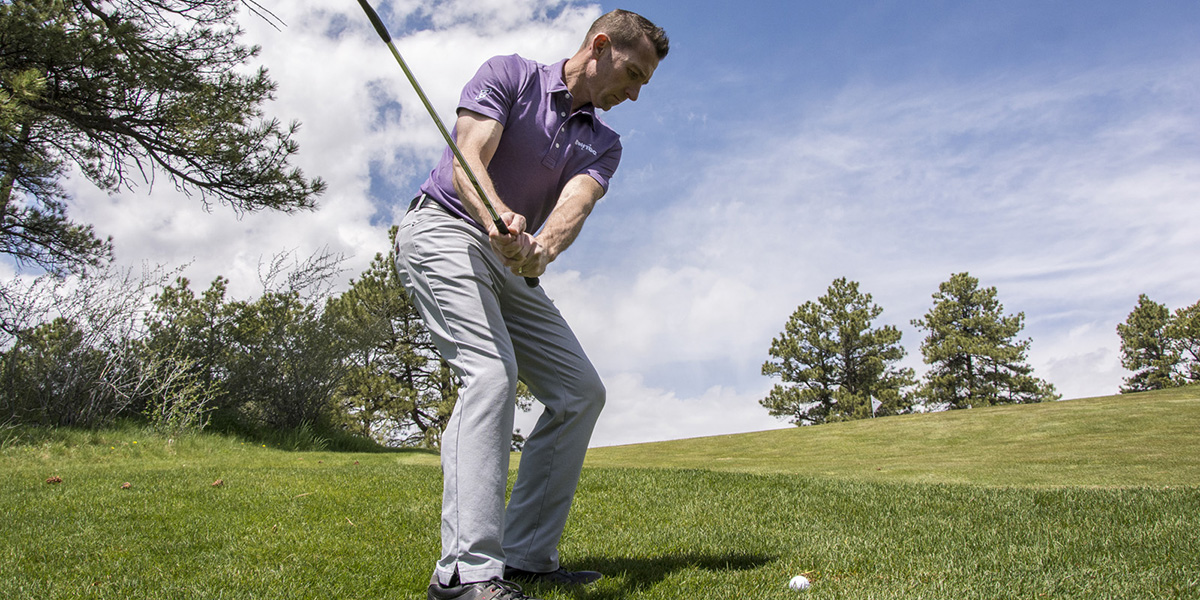 By lowering your head down, you can witness and firsthand the swing and produce a solid contact.

In contrast, a premature head movement allows your upper body to move and reduces the accuracy of the hitting.

Step 4: Alway hit the ball down

Do not hit upon the ball, otherwise, it might end up a pitch shot when the ball goes up into the air.

Instead, hit aggressively down through the target ball to impart the backspin situations.

Step 5: Maintain a balance and tempo

Ideally, you need to keep a balance between your backswing and the follow-through.

It might lead to an over-accelerating into the ball and bad results.

To get a good tempo, we recommend practicing strokes without a ball by moving the club back and forth in a smooth motion.

After a while, we are absolutely sure that you will improve solid shots and distance control.

Step 6: Play with one hand 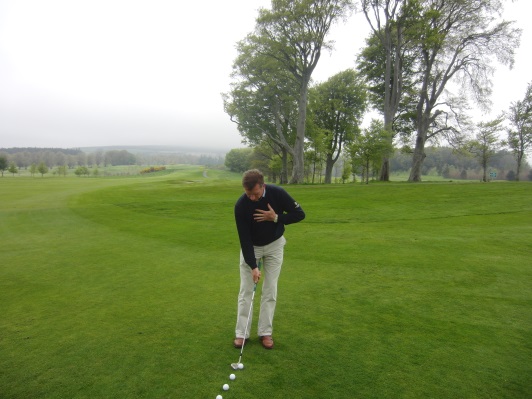 This best practice is to have the other hand wrist in a powerful decision.

Hold clubs by one hand technique is to improve the balance of that hand and require it to move through on its own.

When you master how to practice chipping, you can expect a steady position and shot through impact.

Moreover, you can exchange the hand in the case of fatigue.

Step 7: Make use of slopes

Once you are more familiar with the basic techniques, you should go to pro golf courses and practice chipping with different slopes.

It can help or prevent the shots, but you can improve significantly after every experience.

For example, the uphill slopes can stop the ball.

Whereas, you should intentionally chip long and wait for the ball to filter back to the hole.

Thus, follow the steps above or refer to some other tutorials, say, one by professionals at Mark Crossfield and Coach Lockey, we introduce you right above.

Even more, practice short game under pressure as if you are in a real game of win or lose.

Specifically, you can practice with your friend, in which you two head to head with chipping challenges.

Even we all try to follow the right techniques and best practices as above, we sometimes make common mistakes.

#1. Lack of Loft and Bounce

Every wedge for golf games, in general, and for chip shots, in particular, has loft and bounce.

Nonetheless, some golfers do not make use of them effectively.

Normally, they put hands forwards, which deloft the club and negate the bounce and loft.

As a result, the bottom curve of the wedge can not interact with the turf the right way.

From now on, trust the wonderful neutral shaft angle of the club and swing from natural positions.

As we mention, the setup of the ball is one of the very first importance when it comes to chipping.

Sadly, many of us follow the wrong turn of the phrase “having the ball back in the stance.

It does more harm than help for chip shots because that way, we often leave hands and the handle at the same place.

Consequently, the club is delofted and the bounce – again, is negated.

The better advice is to keep your ball in the center of your preferred stance.

Stop hitting down on the ball from time to time.

It moves your club all into impact and causes the club to dig into the turf.

Rather than that, you should hit the chips down and through.

More specifically, utilize the loft and bounce of the club to a descending motion.

We have completed our article a guide on how to practice chipping to help you prepare for the shot challenges in a short time.

We both know that chip shots come up very frequently in a game and sometimes you lose because of the rough or other factors.

Nonetheless, as long as you combine knowledge and practice chipping drill, your performance will significantly be improved over time!